A vinyl rediscovery - Rocket 88 features Jack Bruce, Alexis Korner, Ian Stewart, and Charlie Watts. This album was originally released on Atlantic Records in March 1981, but was recorded live at the Rotation Club in Hanover, Germany, during a brief tour in November 1979.

20 years out of print and unreleased on compact disc as yet, this is one fascinating slice of history preserved on plastic. The Boogie Woogie music of Rocket 88 at times sounds like the blues, swing, jazz, and R&B all rolled into one harmonious musical bonanza. This band performance is both and elevating and enjoyable.

The origin of Boogie Woogie music is cited as having been launched with a 1928 recording entitled "Pinetop's Boogie Woogie". In 1978, several leading British musicians celebrated the 50th Anniversary of this jaunty music style by forming a band of rotating musicians for live performances. Live appearances were a success, and the band was joined by outstanding horn players from Europe.

The cast of musicians on this Rocket 88 performance include Jack Bruce on double bass, George Green on piano, Bob Hall on piano, Alexis Korner on guitar, John Picard on trombone, Hal 'Cornbread' Singer on tenor sax, Colin Smith on trumpet, Charlie Watts on drums, and Don Weller on tenor sax. Ian Stewart only appears on piano for one song.

Ian Stewart produced the recording and describes at length the recording procedures used to capture this loose band delivering a tight performance. His liner notes on the back cover give the listener an insight to his perspective on this sound and as one of the two founder fathers of The Rollin' Stones. Mick McKenna was the engineer situated in the Rolling Stones Mobile Unit, a recording facility on wheels.

Stewart (1936 - 1985) answered a small advert in a 1962 music paper placed by Brian Jones, seeking a pianist of exceptional quality. Together, Jones and Stewart formed the nucleus of a fledgling R&B combo that would change the face and sound of rock'n'roll music over the next four decades.

Alexis Korner (1928 - 1984) is the father of the modern R&B movement in the U.K. His band, Alexis' Blues Incorporated, was home to many major British rock musicians who would later emerge on the international rock music scene. Jack Bruce is renown as the bassist from the 1960's supergroup Cream.

Charlie Watts has been the drummer for the Rolling Stones since January 1963. Stewart had commented that Charlie joining the band was the catalyst for bigger and better things for the Stones - Stu was right. Watts designed the cover artwork for the Rocket 88 front album sleeve. This band may have contributed to the formation of the Charlie Watts Orchestra in 1986.

This classic live performance on vinyl can be sought out over the Internet by searching online out of print and rare record dealers. Here are some brief details and descriptions of the songs performed by Rocket 88 on Rocket 88.

Rocket 88 - Pete Johnson
This 1949 Pete Johnson composition swings anew in performance by Rocket 88. Selected as the signature song of the band, this particular performance leads off as a rollicking opener for the album. Charlie Watts drums really give the number a kick.

Waiting For The Call - Jack Bruce & Pete Brown
An original composition, spotlighting Jack Bruce on vocals, begins with Bruce's bass notes setting the mood. His vocal styling is actually blues based for this smoky performance, which weaves a jazz influenced undertone into the mix.

St. Louis Blues - W.C. Handy
This song bops and hops to a funky ragtime arrangement. The piano strikes the lead melody and is complimented by both the horn section and rhythm section to bring side one of the album to a close.

Roll `Em Pete - Pete Johnson & Joe Turner
Alexis Korner is featured on vocals in this lively performance. With a singing voice full of gravel, his distinct style is unmistakable. Jack Bruce played bass so intently, he bloodied fingers at the conclusion of this number.

Swindon Swing - Colin Smith
An original instrumental composition by Colin Smith, this is the only track to feature Ian Stewart's glorious boogie woogie piano work. Stu tinkles all over the keys as the song bounces along with the horn section providing blasts of entertainment.

Roadhouse Boogie - Pete Johnson
Another 1949 Pete Johnson composition, this song really pounds out the Boogie Woogie flavor. The rhythm section of Bruce and Watts laid down a driving beat under the soaring horn section.

Talking About Louise - Alexis Korner
An original composition showcasing Alexis Korner on vocals, the song opens with Korner's stinging guitar work. The groove of this number is decidedly slower giving it an almost R&B quality. 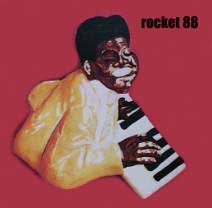