Bootleg Kings Ride Again is a second live disc presenting Bill Wyman and his Rhythm Kings released in May 2001. Wyman formed the Rhythm Kings as a labor of love and was surprised when the band's popularity caught on with British and European audiences. The musicianship of this band surpasses all expectations and is one band to be caught live on stage.

Eight of the nine tracks are from their 2000 British Tour while one song hails from a 1999 British Tour. This disc features Gary Brooker on vocals & piano, Georgie Fame on vocals & organ, Albert Lee on vocals & guitar, Janice Hoyte and Beverley Skeete on vocals, Martin Taylor and Terry Taylor on guitar, Nick Payn and Frank Mead on horns, Henry Spinetti on drums, and Bill Wyman on bass. Graham Broad appears once behinds the skins for track 8.

"Baby Workout", featuring lead vocals by Beverley Skeete, is a rollicking number punctuated by the horn section and a background chorus. Guitarist Albert Lee handles the lead vocals on "Jump, Jive And Wail" as the Rhythm Kings swing and sway with abandon. Wyman's bass guitar notes bounce along in this tailor-made song.

Another version of "Mystery Train" appears on this disc. This second take showcases a vocal duet between Gary Brooker and Georgie Fame. Multiple guitar parts build this rendition its strength, which closes with Nick Payn's humorous toot-toots on his harmonica. Second female vocalist Janice Hoyte takes her turn on "Hello Little Boy". The band sprints during this performance with Wyman's prominent bass lines once again.

"Georgia On My Mind" makes a repeat appearance on this second helping as well. Singing solo, Georgie Fame is accompanied by guitarist Martin Taylor. This wonderful performance usually begins the band's encore set. All in all, another outstanding Dirt Boys Production.

Another live collection, Bootleg Kings - Travelin' Band, was recently released in May 2002. The Rhythm Kings are anticipated to issue a fifth studio album in 2002. Their first live disc, Bootleg Kings - Live In Europe, came out in April 2000. Wyman brought his band to the U.S. for a summer tour in 2001. All three Bootleg Kings discs are available from BillWyman.com online.

Bill Wyman joined The Rollin' Stones on bass guitar on December 7, 1962. He began his music career as a guitarist for The Cliftons in 1961. His love of R&B has taken him on an incredible musical journey that did not end with his departure from the Rolling Stones. Wyman had a desire to record and perform the music he enjoys most. This lead to the formation of his band, the Rhythm Kings.

Wyman's last performance with the Rolling Stones was on August 25, 1990, closing the European Urban Jungle Tour on the Steels Wheels stage in London at Wembley Stadium. Bill failed to post at the video shoot for "Highwire" in 1991. However, he did not officially announce his retirement until January 6, 1993. In 1997, Wyman dusted off his bass by playing a handful of dates. Since 1998, the Rhythm Kings have been regularly touring in either Europe or England. 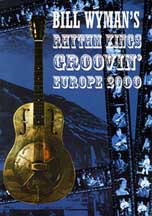