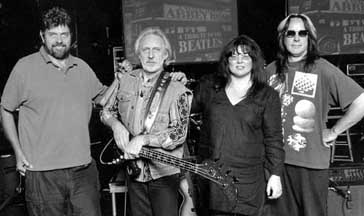 A Walk Down Abbey Road - A Tribute To The Beatles made a bus stop at the Wolf Trap Filene Center in Vienna, Virginia, on Tuesday, July 17, 2001. The unit comprises several heavy-hitting classic rock artists, forming a powerful Beatles cover band. This tour offered starved Beatlemaniacs a chance to hear Beatle classics live on stage.

Alan Parsons is the Musical Director, having organized the tour theme on the heels of the international success of The Beatles latest compilation disc "1". This collection of 27 number #1 Beatles hits from the singles charts of the 1960s hit #1 on the album charts around the globe during the 2000 holiday season.

Alan Parsons has the credentials as his association with The Bealtes began as an engineer at EMI Studios in St. John's Wood, northern London. Now known as Abbey Road Studios, Parsons assisted during the 1969 recording of the phenomenal Abbey Road album. He would continue to work with Paul McCartney on his solo recordings and on Pink Floyd's 1973 monster recording, Dark Side Of The Moon.

John Entwistle as bassist for The Who is the only member of this outfit that actually appeared on stage as an opening act for The Beatles during the 1960s. The Who repeated this role once again, appearing on the bill at the Concert for New York City with headliner Paul McCartney. Entwistle sang lead vocals on "My Wife", his contribution to 1971's Who's Next.

A major moment on stage was hearing John's live bass solo during The Who classic "My Generation". Known as Thunderfingers, his bass guitar playing is unparalleled. Entwistle received the distinction of being named Bassist of the Millennium. His second outstanding bass runs were delivered on the 1973 rocker "The Real Me" from Quadrophenia.

The band had additional support from Godfrey Townsend on guitar and vocals and Steve Lugono on drums; both members of the John Entwistle Band. Townsend sang lead on "My Generation" and "The Real Me". Many complimentary comments were made in the audience about the musicianship exhibited by both. For another perspective on this power trio, pick up the John Entwistle Band's Left For Live, released in 1999 as a document of their stage presence on the road.

Todd Rundgren's association began with producing Badfinger for Apple Records in 1972. Later, he released a Beatles parody album as Utopia titled Deface The Music in 1980, and contributed to the soundtrack for Up Against It. Rundgren also participated as an All Starr Band member for Ringo Starr twice in 1992, and again in 1999.

"Magical Mystery Tour" opened the first half of A Walk Down Abbey Road. The band performed two sets with solo material comprising the early portion and classic Beatles rockers and ballads after intermission. No dung beetles all evening long. The Beatles musical soundtrack has proven to be timeless in its appeal to new a generation of fans around the world.

Alan Parsons has always sang back-up vocals with the Project, but he stepped to the fore to perform the 'White Album' classic "Blackbird" alone on an acoustic guitar. Godfrey Townsend sang lead on Harrison's "Here Comes The Sun".

Todd Rundgren treated the audience to his more notable numbers, "Open My Eyes" and "Bang On The Drum". He later sang Lennon's "You've Got To Hide Your Love Away" solo on acoustic guitar and delivered a searing lead guitar solo during Harrison's "While My Guitar Gently Weeps".

David Pack sang ballads from Ambrosia, "You're The Biggest Part Of Me" and "How Much I Feel", as well as handling lead vocals on "Eye In The Sky" and "Games People Play", two Alan Parsons Project pieces in the first half of the evening.

Ann Wilson sang her hits from Heart, rocking out with "Crazy On You", "Barracuda", and the tender "Dreamboat Annie". She turned in a strong vocal on the McCartney solo ballad "Maybe I'm Amazed" and a excellent flute solo during "The Fool On The Hill". Wilson reprised a live version of "I'm Down" and selected the obscure "Everybody's Got Something To Hide Except Me And My Monkey" off the 'White Album'. "Hey Jude" featured another wonderful lead vocal by her.

The surprise encore of "Birthday" created a euphoric atmosphere with the entire audience springing up on its feet. The Abbey Road album suite, closing with "The End", was an outstanding choice for the finale of an evening with magical melodies and musical memories.

With George Harrison's passing in November last year, those who grew up with The Beatles were sadden by the loss of a tender, spiritual man. The classic songbook of those Fab Liverpool Lads created a soundtrack for the ages. Their Merseybeat sound continues to entertain audiences 32 years after the band folded. Parsons is assembling another walk down the summer 2002 tour circuit. 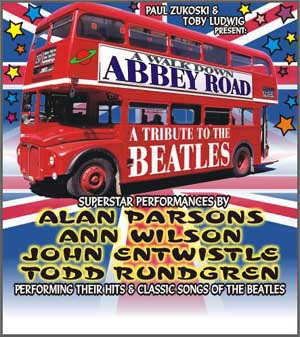