A Mystical History Tour
Celebrating The Beatles and their music 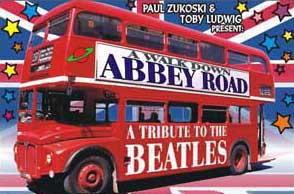 A Walk Down Abbey Road - A Tribute To The Beatles returned for another bus trip down musical memory lane, stopping at the Keswick Theatre in Glenside, Pennsylvania, on Wednesday, July 24, 2002. This year marks the 40th anniversary of The Beatles first single release on vinyl with "Love Me Do".

The resonant rhythm guitar strum on "A Hard Days Night" launched the evening. Christopher Cross handled lead vocals supported by Bruce's vocal harmony, which featured four acoustic guitars and two electric guitars. Mark Farner was the first to solo and sang Grand Funk Railroad's 1970 single "I'm Your Captain (Closer To Home)". The audience joined in on the coda chorus, which showcased Parsons on flute. Farner added a dedication, "For all the Vietnam veterans, God bless you brothers and sisters".

Commenting his 1980 breakthrough hit was authentic Texas rock'n'roll, Cross sang "Ride Like The Wind", adding a hot electric guitar solo in his performance. Bruce lent harmony vocals again. Alan Parsons was next performing a 1982 instrumental and sang lead on "Sirius/Eye In The Sky" from the Alan Parsons Project. Parsons mentioned "And I Love Her" was one of his early Beatle favorites and delivered a strong vocal rendition of the 1964 McCartney classic.

Jack Bruce laid down a rumbling bass solo, which segued into Cream's 1967 classic, "Sunshine Of Your Love", from Disraeli Gears. Bruce's performance rocked the theater, commanding a standing ovation from the audience. Accompanied by keyboards, synth, and quiet drumming, Bruce sang an incredible version of "Eleanor Rigby", originally recorded for Revolver.

2002's Walk Down Abbey Road featured a new element, an unplugged set. A brief acoustic suite opened the second half of the show with Lennon's "Norwegian Wood (This Bird has Flown)". Bruce took the lead helped out by group harmonies. The musicians as a unit sang Lennon's rousing "You've Got To Hide Your Love Away" as the audience punctuated the "Hey!" lyric.

Parsons introduced their tribute to George Harrison with Godfrey Townsend singing "Here Comes The Sun". Bruce sang on one of the highlights of the night, "While My Guitar Gently Weeps". Eric Clapton also covered this classic with McCartney on piano at Queen Elizabeth's June Golden Jubilee concert in London.

Cross and Farner sang as a duet on the Beatlemania classic "I Want To Hold Your Hand". Parsons initiated an audience clap-along as Murphy swayed behind his drumkit in Starr-style. The Abbey Road suite which closes that album was a tremendous encore selection. "Golden Slumbers/Carry That Weight/The End" featured Bruce on lead vocals for solos with the group handling the chorus on "The End". Cross and Townsend traded lead solos for the dueling guitars passage, and Murphy's punchy drumming gave their version an edge in its delivery.

Cross was featured on more lead vocals than his bandmates. Farner projected the most engaging presence, strutting about the stage with guitar in hand. Parsons bravely and successfully sang lead vocals on both solo and Beatles songs. Townsend's hot guitar licks and solo leads set several songs ablaze. But, it was bass aficionado Bruce who stole the show with his subtle showmanship and spirited vocals.

Abbey Road tour support includes alumni John Beck on keyboards and Godfrey Townsend on guitar with newcomer Steve Murphy on drums. Todd Rundgren from Utopia has appeared on an alternating schedule. However Eric Carmen of the Raspberries, unfortunately, decided he could not continue on with the tour after a date in Hawaii.

Bruce and Farner have both toured as members of the All Starr Band backing Ringo Starr. Parsons' credentials include engineering for The Bealtes at Abbey Road Studios and working on Paul McCartney's solo albums. Beatles music is universally recognized by musicians as being an unsurpassed stellar body of work.

Both George Harrison's and John Entwistle's recent deaths underscore the strength and attraction of these Merseybeat classics. Babyboomer fans have yet another chance to celebrate the musical soundtrack of their youth. The Beatles songbook continues to be enjoyed everyday on the radio or on a turntable around the globe.

Cross received fans, signing seated behind a table in the historic lobby. Bruce, Parsons, and Farner each greeted fans outside beside the tour bus, stopping to sign and pose for pix. Murphy, Beck, and Townsend were also outside behind the venue signing for the fans and engaging in conversation.

Fortunately, I had an opportunity to express my condolences to Townsend over the unexpected death of John Entwistle. I mentioned to Godfrey that I had seen him play with John solo twice before and on 2001's Walk Down Abbey Road tour. We both shared our thoughts about John, expressing our disbelief that he had died suddenly.

Beatles music is timeless. Generation after generation become new Beatles fans. Beatlemania has a sustained life all its own. The power of this presentation draws on musical memories and performing personalities, which combines for a fab evening of Beatles classics with solo artist popular hits. This musical Beatles Tribute concept is slated to continue with another summer tour in 2003.