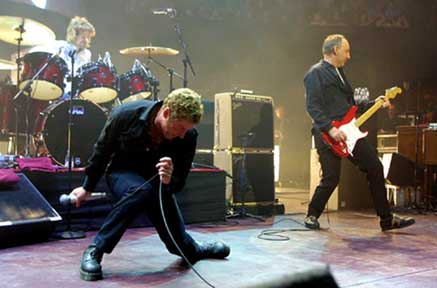 The Who appeared on the first of two nights, supporting the Teenage Cancer Trust at the prestigious Royal Albert Hall in London on Thursday, February 7, 2002. The legendary British rockers were contributing performers as part of a five night stand of benefit concerts at the venue to raise funds for this worthwhile charity.

Without any introduction, the power trio took the stage at 8:30 PM. Amid an intimate ambiance, The Who opened their set with "I Can't Explain". Pete Townshend attacked his guitar with the fierceness of his younger days in an extended intro. Roger Daltrey looked fit and belted out the lyrics with unbridled passion. John Entwistle's nimble fingers tore across his bass guitar. Zak Satrkey's drumming completed the sound.

"Anyway, Anyhow, Anywhere" is the singular Who composing credit shared between Townshend and Daltrey. This May 1965 single collaboration has become a recent stage staple. Townshend jammed away on an extended guitar coda that was augmented by stage lighting. Starkey's drumwork was particularly powerful during this number.

"My Wife" was Entwistle's only lead vocal behind the microphone. Daltrey handled harmony vocals. Midway through this performance, Townshend switched electric guitars with a stagehand. Starkey's drums punched up the 1971 rocker as Townshend turned in a searing guitar solo.

"Who Are You" cranked as Townshend let loose with a windmill assault to close the classic 1978 Who single. Daltrey commented, "John's on fire". Entwistle's bass had tiny red lights imbedded in the frets which gave his bass guitar a subtle glow. Townshend then retorted, "I use to set the fucking things on fire", which drew applause from the Royal Albert Hall audience.

Townshend began an aborted solo acoustic version of "Drowned", but promptly forgot the words as he slowly walked behind the drumstand. He returned forward to perform "I'm One" also from Quadrophenia instead. Townshend verbally recognized Daltrey as an organizer of the T.C.T. and encouraged the audience to support its efforts.

The Who ended their set with the 1971 classic "Won't Get Fooled Again" from Who's Next. Daltrey remained on stage to discuss the Teenage Cancer Trust mission to aid terminally ill British teenagers. Joining the trio on stage in performance were drummer Zak Starkey, son of Ringo Starr, and keyboardist John "Rabbit" Bundrick.

The encores consisted of classic Who stage favorites. Daltrey played an acoustic guitar during "The Kids Are Alright". "Summertime Blues" rocked in raucous Who fashion. After a mellow break, a jam ensued as Daltrey closed on a softer style. Townshend picked up the lyric, singing the song in reprise with Daltrey joining in. "Young Man Blues" featured a tremendous solo by Townshend. The lyrics invited a humorous interaction with members of the audience in the front row as Daltrey joked, pointing to Townshend that he "had all the money".

"My Generation" - the classic 1965 Mod masterpiece - stills rocks the bollocks in 2002. John Entwistle's bass solo was enhanced by his silhouette projected on the stage as the shadow of his fingers danced up and down the fret on his bass guitar neck. This version included a funky groove break. Daltrey teased audience members by swinging his microphone in the faces of those in the front row as several tried to reach for the mic as it was yanked away from their grasp.

Many American Who fans were in attendance for these shows as well as international Who fans from all over the world. It's great to meet other Who fans with the same passion for this legendary band live. The concertphile appreciation of celebrating the in-concert-experience is the essence of RockonTour.

This Who concert was on my birthday, which motivated me to attend three T.C.T. concerts. My host, Stephen, was a volunteer for the Teenage Cancer Trust. He kindly gave me a Who setlist dated February 7th as a birthday gift. Stephen put me up in addition to other guests from Germany, Japan, and Switzerland.

After the performance, we all waited outside and were rewarded by greeting bassist John Entwistle, percussionist Zak Starkey, and keyboardist John "Rabbit" Bundrick. All three of them were kind enough to sign my RAH ticket. Hjordis, a beautiful woman working at the RAH box office, found me another unused Feb 7th RAH ticket for my collection.

The Who have announced an upcoming 2002 Summer U.S. Tour. This tour is being staged over three legs just like their 2000 U.S. tour. After having seen The Who perform live over a 20 year period, the band is now playing better together on stage for my money.

February 7th setlist: I Can't Explain * Substitute * Anyway, Anyhow, Anywhere * I Don't Even Know Myself * Amazing Journey/Sparks * Pinball Wizard * I'm Free * My Wife * Who Are You * Getting In Tune * Behind Blue Eyes * I'm One * Baba O'Riley * You Better You Bet * 5:15 * Won't Get Fooled Again * Encore: The Kids Are Alright * Summertime Blues * Young Man Blues * My Generation