Legendary Trio Jams for Charity
The Who thunder away on stage 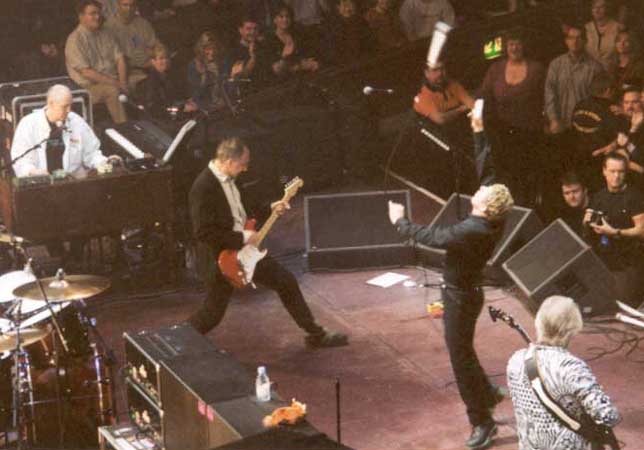 The Who performed again at the Royal Albert Hall on Friday, February 8, 2002, the final night of their double stand engagement in support of the Teenage Cancer Trust. The classic British Invasion Band are poised to celebrate their 40th anniversary together as Daltrey, Entwistle, and Townshend continue to command center stage.

Townshend showed no signs of aging as he leaped about the stage during the band's rendition of "Substitute", their 1966 tour de force. Under a lone spotlight playing an electric guitar, Pete performed a subtle solo segue into "Anyway, Anyhow, Anywhere", which pumped up the crowd.

The Who played a few selections from Tommy. Holding two tambourines during "Amazing Journey/Sparks", Daltrey punctured one by banging them together with tremendous force. Townshend was darting onto the monitors with a front and center guitar solo that incited enthusiastic response. "Pinball Wizard" was stellar, and "I'm Free" also jammed.

Townshend treated the February 8th audience to both "I'm One" and "Drowned", two numbers from Quadrophenia. His acoustic performance featured stunning solos. During "Relay", a Lifehouse outtake released as a 1973 Who single, Townshend turned out another fierce solo on electric guitar with a band jam ensuing on stage in its wake.

"5:15" rocked the Hall, but before Entwistle could launch into his bass solo, he held up a finger to indicate he had to fiddle with his bass amp controls. Townshend's solo on this Quadrophenia classic was an in-your-face assault like machine gun fire. Three times in performance, four male members of the audience made their way on stage as The Who played; during "Getting In Tune", "5:15" and two for "Baba O'Riley". Each individual was caught and expelled from the Hall.

During the encore of "Young Man Blues", Townshend jumped onto a monitor at the front of the stage that collapsed under his weight. Members of the front row reached out to cushion Townshend's fall. He landed face up, supported by his fans. As Townshend lay on his back, he encouraged a front row fan to play his guitar as the band continued "Young Man Blues" uninterrupted, which thrilled the audience.

The band fired off another incendiary version of "My Generation". I never tire of Entwistle's thunderous bass guitar solo. This rendition featured a longer guitar jam by Townshend. Uli, a young German girl I met, let me snap off several shots with her camera of The Who as they performed this 37 year old classic rock single.

Shari, who I had met the night before, was in the front row this night. She handed Townshend several bouquets of flowers for all of the T.C.T. children brought out on stage with The Who. As he was leaving after the concert, Daltrey called out to Shari to thank her before he drove off.

I was outside before the concert began and saw Queen guitarist Brian May enter backstage. Afterwards, quondam Stones bassist Bill Wyman came out the stage exit door. He recognized me, and I got to chat with him as he made his way to a waiting vehicle. Once again, I was blessed with having drummer Zak Starkey and pianist John Bundrick sign my second RAH ticket.

The Who have announced an upcoming 2002 Summer U.S. Tour. This tour is being staged over three legs just like their 2000 U.S. tour. After having seen The Who perform live over a 20 year period, the band is now playing better together on stage for my money.