Fiddle About an uneven route
Musical miscues by The Who 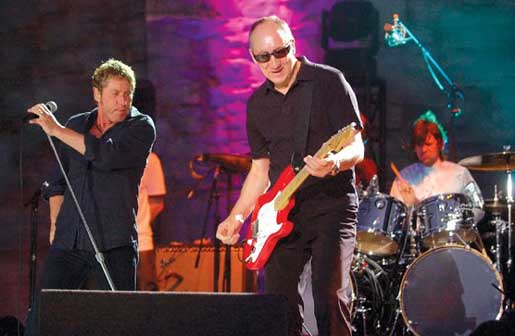 The power was present, but the thunder was missing. Thunderfingers no longer stoked the bass guitar sound. The Who appeared at the Tweeter Center on the Waterfront in Camden, New Jersey, on Saturday, July 27, 2002. Inexplicably, this Who concert seemed to be off for whatever reasons as the band failed to channel its musical energies correctly.

Who founder and bass guitarist John Alec Entwistle passed away one month ago from this performance date - hard to comprehend really. Daltrey, Palladino, and Townshend were all dressed in black as a gesture to the memory of Entwistle. During the immediate aftermath of Entwistle's death, Townshend sought out Pino Palladino to handle the bass guitar chore for this summer tour.

A Who video comprising interview clips with members of the band and snippets of The Who performing before cameras was shown before the concert commenced. Performing with The Who on this tour are keyboardist John 'Rabbit' Bundrick, rhythm guitarist Simon Townshend, drummer Zak Starkey, and bassist Pino Palladino.

Without any announcement, The Who walked out on stage and tore into their classic 1965 single, "I Can't Explain". With characteristic windmills, Townshend lead the unit in a strong version to begin the evening. Younger brother, Simon, provided back up vocal support, and new bassist Palladino was bopping to the beat.

Prior to Entwistle's passing, press reports indicated The Who were promising back catalogue material that had not been performed in concert for quite some time. The only number that met this criteria was "Another Tricky Day" from their 1981 Faces Dances album. Daltrey and Townshend shared strong harmony vocals. During the bridge which includes a bass passage, Palladino did not meet the volume needed to project his solo.

Positioned as the second to last song before walking off for their encore, The Who performed their classic 1965 rock anthem "My Generation". Talk about filling someone else's bass notes, Pino Palladino played the late John Entwistle's bass guitar solo in his own style. Dissimilar yes, this stage version rocked hard, but the jam session that segued afterward was pruned back from an extended coda.

For the encore, The Who revisited a suite of songs from their 1969 international breakthrough rock opera Tommy. "Pinball Wizard" did not match the intro bass resonance that John Entwistle contributed live to this particular number. This song, more than any other, revealed the depth of the musical loss this band has suffered. The Camden audience, however, neither cared nor noticed as measured by their support and applause.

Canadian Shaun Harder, 33 from New Westminster, British Columbia, flew into NYC and drove down to attend this Who concert in New Jersey. His observations were an expression of mixed emotions. Harder thought it was a hit and miss performance of an excellent selection of songs with some outstanding performances. "I'm not disappointed", stated Harder.

Harder enjoyed Daltrey's incredible energy and tambourine intensity during "Sparks". Back in June 1989, he took a road trip through the States to catch The Who in Toronto, commenting there are, "not a lot of bands worth shelling out for". His favorites included "You Better, You Bet" and "Anyway, Anyhow, Anywhere", feeling Palladino did an adequate job.

The Who sans bassist John Entwistle is entirely another beast. Thankfully, The Who recorded a complete performance with John on June 15th for their tour sponsor, JBL. Entwistle and Who fans can only hope that this final taping will see release in some musical form as a final statement on the majesty and brilliance of John Entwistle's participation with The Who.