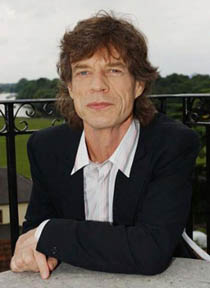 Mick Jagger will be bestowed with a knighthood by Queen Elizabeth II at a ceremony later in the year. Ironically, Jagger had been targeted by Scotland Yard for his anit-establishment attitude, which resulted in a drug bust at Redlands on February 12, 1967. Now 35 years later, one of the most famous voices of the British Invasion music movement is finally becoming respectable.

Jagger, in preparations for a 40th anniversary tour with The Rolling Stones, said his 4-year-old son Gabriel was a bit confused about the knighthood. He said Gabriel told his class that his father was going to be knighted, and when the teacher asked, "What does that mean?", Gabriel said: "Well, he goes to the castle to see the king and gets to be a knight, and, from then on, gets to wear armor all the time."

Jagger is receiving his knighthood in recognition of his services to the international music industry as an invaluable leading export of British music around the globe. Begun as an R&B combo in July 1962, The Rollin' Stones, formed by Brain Jones and Ian Stewart, would become a major international touring sensation.

Saying he was delighted with this latest accolade, Sir Michael's title nomination has provoked a debate about who is suitable for the Queen's honors list. "I don't think it will change me that much," said Jagger. "I don't see any great changes in friends who have had similar things happen to them". With a drug conviction and a reputation as a womanizer, the knighting of Jagger has come as a surprise to many observers.

The British government selects most of the honors that the Queen bestows twice a year. The 2002 honors were announced to coincide with her state recognized birthday. Queen Elizabeth's actual birthdate is April 21, but her 76th birthday was officially celebrated on Saturday, June 15, 2002, with an ornate parade, the Trooping of the Color. Sources advance Prime Minister Tony Blair lobbied for Jagger's investiture.