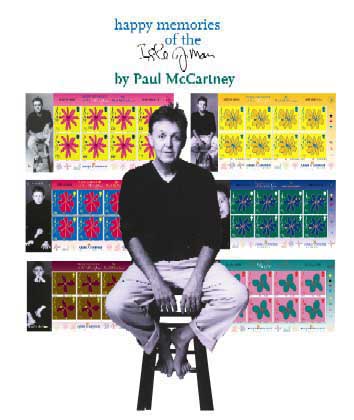 Sir James Paul McCartney is more than just a musician. McCartney has been active in multiple arenas of art from painting to publishing and from poetry to symphonies. Now Sir Paul has turned his talents to the world of postage stamp design, contributing six individual stamps in an exclusive folder issued on July 1, 2002.

In a bold move that is sure to please the philately worldwide, a major international figure has lent a personal touch in designing this special stamp issue. McCartney's inspiration for these postage stamps were from recollections of his youth when he and his family visited the Isle of Man on holiday.

The philatelic branch of the Isle of Man Post Office approached Paul McCartney and asked if he may consider creating an original stamp series to be issued by the Isle of Man government. McCartney accepted their proposal and designed six distinct stamps for public use and philatelic issue. Having turned 60 last month with a new bride, the Liverpool native is not deterred from taking on new artistic challenges.

Sir Paul's unique folder representing his happy childhood memories of vacationing on the island are being made available in several formats for purchase on July 1. He is the first musician to design a series of legal postage stamps for both the general public and private collectors. "Paul's stamps are truly works of art", commented Dot Tilbury, department manager of the Isle of Man stamp bureau, "They will be prized by collectors worldwide".

"We anticipate that the issue will be extremely popular; the stamps have just the look that collectors like and, as art, they can hang on the wall in any decor", said Dot Tilbury. "When we received Paul's designs they so cheered up the whole department that we christened them the 'Happy Stamps', a theme Paul loved as it reflected his inspiration from fond memories he had of the island from a childhood visit when he was growing up in Liverpool".

Titled 'Happy Memories of the Isle of Man', the Paul McCartney stamp edition came as a result from the success of an art exhibition McCartney staged in New York. His paintings attracted the attention of the Isle of Man postal division, motivating an official request sent to the musician to consider designing a set of postage stamps. Sir Paul McCartney stated, "I'm very pleased that the Adopt A Minefield campaign will benefit from this issue, which I was honored to create from happy memories of an old stamping ground".

The Isle of Man stamp bureau will print 170,000 of the McCartney edition, which has received royal approval by Queen Elizabeth II. A percentage of the sales revenue is being donated to the Adopt A Minefield charity, the anti-landmine charity fronted by newlyweds Paul and Heather McCartney. 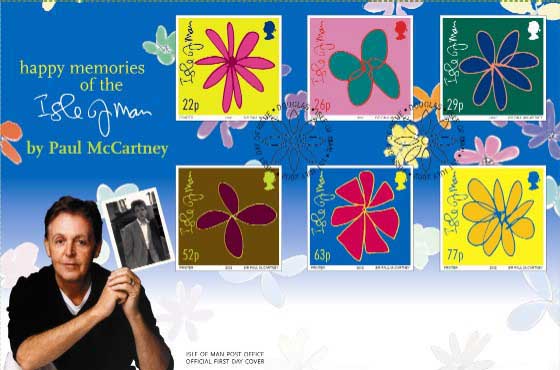 Happy Memories of the Isle of Man by Paul McCartney