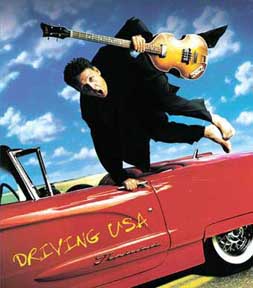 Sir James Paul McCartney is hitting the road April Fools Day 2002. Macca is launching the "Driving USA Tour" at the Oakland Arena, his first jaunt in 9 years since his 1993 New World Tour. Demand for McCartney tickets and a tour stop is outpacing all projected expectations.

Riding high on the success of his performance at the Concert for New York City in October 2001, McCartney was motivated to head out on tour to back his latest endeavor, Driving Rain. 14 dates were initially anticipated, but 27 dates now constitute the "Driving USA Tour".

Macca has been busy appearing on the international stage, the Concert for New York City on October 20; the Nobel Peace 100th Anniversary December 11 in Oslo; Super Bowl XXXVI February 3 in New Orleans; and at the George Harrison Tribute Concert on February 24 in Liverpool.

Sir Paul will be appearing on the Party At The Palace celebrity bill with Eric Clapton, Mick Jagger, and Brian Wilson to celebrate Queen Elizabeth's Golden Jubilee on the British Throne on June 3 at Buckingham Palace. He also confirmed he will perform his film title composition, "Vanilla Sky", on March 24 at the 2002 74th Annual Academy Awards. This soundtrack song is his second music nomination for an Oscar.

As a member of the Fab Four, the Cute Beatle conducted 4 tours of the United States with the famous Liverpudlian quartet from 1964 through 1966. McCartney toured the USA with Wings only once in 1976. His other major U.S. solo tour outings were staged in 1989, 1990, and 1993.