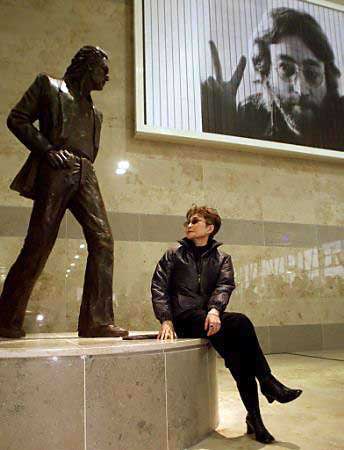 Yoko Ono attended the unveiling ceremony of a statue of John Lennon at the newly renamed Liverpool John Lennon Airport on Friday, March 16, 2002. The statue welcomes travelers inside the main hall at the airport's renovated terminal. "It's brilliant," Ono said. "It captures John and shows him moving, alive, rather than standing still like some statues."

Ono was joined by British Prime Minister Tony Blair's wife, Cherie Booth, to dedicate the statue of her late husband. The likeness resembles the prolific composer during his New York days, striding out with long hair swept back. The bronze Lennon overlooks the refurbished £32.5 million terminal's check-in hall. "This is a very joyous day," said Lennon's widow Ono.

Liverpool sculptor Tom Murphy fashioned the seven-foot statue of Lennon in a suit and T-shirt, emboldened by the lyric "Above us only sky" from the native son's classic song "Imagine". The statue dedication completes the northwestern city airport's rebranding as 'Liverpool John Lennon Airport'. The legendary Beatle has been immortalized, positioned by a passenger walkway. Drawings made by the late John Lennon are also being exhibited in the main terminal.

Years of relentless campaigning for the posthumous name change had finally borne fruit. An annual 2.5 million airline passengers are anticipated to pass through Liverpool John Lennon Airport. The Beatles may have predated the jet-set crowd, but the lads were regularly greeted at international airports by legions of screaming female fans. Lennon disliked the travel associated with Beatles tours, which makes this an ironic dedication in memory of the outspoken Beatle.