The Band from Acton
The Who return to U.S. for 2002 Summer Tour 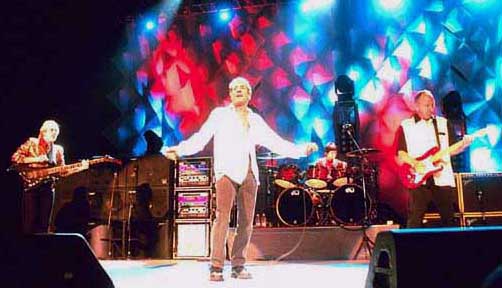 Legendary British rockers, The Who, have announced a 20 date 2002 U.S. Summer Tour. This tour itinerary follows the individual three-leg-segments conducted in the US over the summer of 2000. The anticipation is high for The Who to assault American stages with their new found energy on stage as a five piece band.

Rumors have been circulating The Who have had plans to enter the recording studio. Roger Daltrey has been the motivation behind these plans, and the band may see studio action this Fall when they are scheduled to commence recording together. Bassist John Entwistle has anticipated recording again with his mates from Acton. Primary Who composer, guitarist Pete Townshend, has been reluctant to commit to recording a new studio Who album.

Released in 1982, It's Hard remains their last studio effort. Since their 1982 North American Farewell Tour, The Who have conducted a 25th Anniversary Tour in 1989; a Quadrophenia Tour in 1996 and 1997; a mini-tour consisting of 7 dates in 1999; and a US tour in 2000. There have also been sporadic one-off performances; most notably, The Who appearing at Live Aid London on July 13, 1985, at Wembley Stadium.

The Who ruled at the Concert for New York City on Saturday, October 20, 2001. This was their only stage appearance last year. The Who performed five dates in Britain during the 2002 winter season. Specifically, the band donated their services to support the Teenage Cancer Trust fund, benefiting the construction of medical facilities for young adults in British hospitals. The band had previously appeared at the Royal Albert Hall to aid the T.C.T. in November 2000.