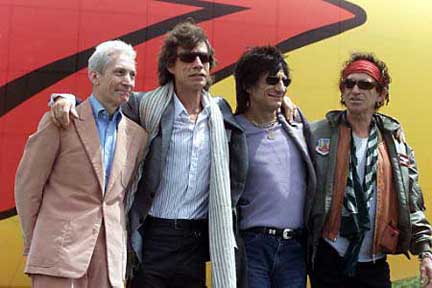 The media event announced The Rolling Stones 2002 - 2003 40th Anniversary World Tour. Using a handheld Mick-cam inside the zeppelin, Jagger gave Stones fans a glimpse into the cabin where the legendary band members were seated inside with the pilot. The band posed for pictures in front of their banana blimp before fielding questions at a press conference.

The 2002 Tour will begin on the East Coast in Boston and continue until December 2002, when the band takes a holiday break. The North American tour will resume in January before ending at Mexico City in February 2003. A Far East Tour in the Spring will include Australia, Japan, and possibly their first-ever visit to red China. A European Tour for Summer 2003 will round out their international itinerary by August 2003. Rumors of a few final American dates in September 2003 have surfaced.

Asked why after performing together as a band for almost 40 years that they were heading out onto the road once again, Mick Jagger retorted, "Either we stay at home and become pillars of the community, or we go out and tour. We couldn't really find any communities that still needed pillars".

Keith Richards generated laughter when asked about the songs for this tour, by remarking, "The set list is a bit down the road yet. Depends if we can remember them. We're open to suggestions". When asked why the band is charging more for their tickets than Paul McCartney, Ron Wood responded, "Because there's more of us". Drummer Charlie Watts remained characteristically silent throughout the media spectacle.

The Stones are poised to span the millennium with this latest world tour. The new endeavor will be their 15th tour of North America. Unlike tours of their past, the Rolling Stones have plans to rehearse three separate concerts performances for stadiums, arenas, and theaters. Some national markets will be blessed with all three modes of live performance.

The 2002 tour launch is scheduled in Boston at the Fleet Center arena on Tuesday, September 3, 2002. The band moves on to CMGI Stadium in Foxboro for a concert on Thursday, September 5, 2002. Finally back in Boston, the group will perform at the Orpheum Theatre for a club date on Sunday, September 8, 2002. The four Stones will be joined onstage by pianist Chuck Leavell (since 1982) and bassist Daryl Jones (since 1994).

Speculation has the band traveling from New York to Paris to commence recording tracks for a proposed greatest hits release planned to coincide with their 40th Anniversary Tour. A complete album of new studio material is not anticipated in 2002. Guitarist Wood confirmed in a previous interview that Stones members have been compiling tracks from their archives for a possible boxed set project including rarities, outtakes, and unreleased live tracks.

As with past tours, the band will rehearse in Toronto, culminating in a pre-tour gig performance. Since 1989, the Rolling Stones have established themselves as touring industry mega-giants. This latest jaunt is sure to have the classic British Invasion band clear a billion dollars in revenues from the long and winding road. The 1997 - 1999 series of concerts grossed $337.2 million, performing before 5.6 million people.

Individually, Watts released The Charlie Watts/Jim Keltner Project in 2000. Both Jagger's Goddess In The Doorway and Wood's Not For Beginners were released in 2001. Richards recently performed on stage at a Willie Nelson tribute concert on April 14 at the Ryman Auditorium in Nashville.

The Rollin' Stones made their stage debut at the Marquee Jazz Club in London on July 12, 1962. The Rolling Stones first performance in America was at the Swing Auditorium in San Bernadino, California, on June 5, 1964. To date, the last Stones concert was held at Mungersdorfer Stadium in Cologne, Germany, on June 20, 1999. 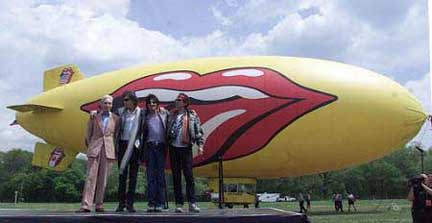