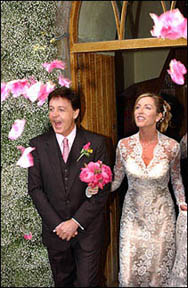 Making a tardy entrance in the chapel to a bridal march which had been rearranged with the song "Heather", a track McCartney recorded on his new disc Driving Rain, the bride carried a bouquet of 11 McCartney roses - named in honor of her new husband - and two peonies. Ms. Mills wept tears of joy during their vows. Wedding bells on the grounds pealed around 5:00 PM, announcing their official union as flower petals fluttered about during their exit from the intimate church.

The wedding ceremony was conducted by the Venerable Cecil Pringle, the Archdeacon of Clogher. As the newlyweds strode down the aisle together, the organist played the "Wedding March" from the British film The Family Way, which he composed for the 1967 soundtrack.

Beatles drummer Ringo Starr is said to have participated in the wedding ceremony by reading a poem that reflected the lyrics of "All You Need Is Love". Michael McCartney, Macca's younger brother, acted as best man once again. Members of the late Linda McCartney's family had flown in from the United States.

Women dressed in traditional Indian costume on the castle grounds and were expected to entertain during a vegetarian feast, toasted by crates of champagne, and 150 kegs of Ireland's famous black Guinness stout. An elaborate fireworks display that rivaled Dublin's millennium celebrations, was ignited to end the evening's festivities.

Estimates of the lavish lakeside ceremony, held at the 17th century Castle Leslie in the Ulster border county of Monaghan, were as high as £1 million. After sailing upon the castle lake together on a vessel covered with flowers to view the spectacular fireworks production, the McCartneys left by helicopter to Belfast airport to board a private jet to commence their honeymoon.

The spirited couple announced their engagement on July 27, 2001. However, McCartney revealed to the media that his four children were not comfortable with the idea he was going to remarry. Their union is Lady Heather's second marriage. She had been alter bound again in 1997, when she decided against marriage at that time. Ms. Mills released a 1999 U.K. single, "VO!CE", which featured support from her future husband.

McCartney and first wife, Linda McCartney, were married on March 12, 1969. Together, they had three children, Mary, Stella, and James. Heather McCartney is from Linda Eastman's first marriage. On March 11, 1997, Sir Paul and Lady Linda were bestowed their official titles at an investiture ceremony by Queen Elizabeth II.

Linda McCartney succumbed to breast cancer on April 17, 1998. The loss for McCartney was tremendous. The Royal Albert Hall was host to a special event on April 10, 1999, honoring the late Mrs. McCartney. Chrissie Hynde organized "Here There and Everywhere - a Concert for Linda", with McCartney delivering a last minute performance on the bill.