The Yardbirds, formed during the explosion of young British R&B enthusiasts in 1963, are headlining their first U.S. tour in decades. The reformed Yardbirds appeared in Annapolis, Maryland, at Rams Head Tavern on Wednesday, June 4, 2003.

Rhythm guitarist Chris Dreja and drummer Jim McCarty are joined by a talented trio of musicians, John "Gypie" Mayo on lead guitar, vocalist John Idan on bass, and harpist Alan Glen. The band was fantastic on stage, creating the rave up excitement of the group from the London club scene.

Idan greeted the Annapolis audience with, "Hey Everybody", as the band reached back into their R&B past to perform a strong cover of "I'm Not Talking". A tremendous version of "Over Under Sideways Down" cranked and featured an intense harp on the chorus. Idan sounded like the Late Keith Relf on "Crying Out For Love", a new McCarty original.

"Heart Of Soul" featured Gypie's stunning guitar solo and Dreja's powerful rhythm strokes. Their terrific take of "Little Games", the only Page-era selection, jammed with twin guitar passages. Gypie's guitar solo cried like a siren, and the rhythm section rocked out with determination. "Dream Within A Dream", a new up-tempo rocker, was dedicated to poet Edgar Allen Poe buried in Baltimore.

A fierce version of "Shapes Of Things" showcased Idan's running bass lines. Beforehand, he commented about the 1966 song having been recorded in Chicago during a tumultuous epoch. Gypie's outstanding lead guitar work on "Happenings Ten Years Time Ago" was absolutely incredible. The band cranked out a driving rendition of this Yardbirds classic.

McCarty sang lead vocals on "Back Where I Started", hearkening back to the Box of Frogs reunion project from 1984. Glen added an intense harp solo and percussion on this Annapolis highlight. Another strong new McCarty composition, "Mystery Of Being", was guitar-driven, sounding great live.

Returning for the encore with their instruments in hand, The Yardbirds commenced a strong drum-driven version of "I'm A Man". Idan's thumping bass and Glen's wailing harp solo were overshadowed by Gypie's phenomenal guitar tricks. A tough R&B rendition of "Smokestack Lightning" closed the evening. Gypie's fluid guitar notes segued into slashing lines and leads, generating a second standing ovation for the band.

Bob Lubbehusen, 55 from Annadale, last saw The Yardbirds live with Beck on lead guitar and Page on bass at the demolished Alexandria roller rink in 1966. He commented, "I'd say they're gonna have another guitar guy coming out of The Yardbirds". Lubbehusen added, "The performance was great, one of the best performances I've seen all year".

Following The Yardbirds induction into the Rock and Roll Hall of Fame in 1992, a decision rekindled the defunct group. Now in 2003, Birdland is the first new studio album from The Yardbirds since 1967. Beck puts in an appearance on Birdland, an amazing album more than three decades after The Yardbirds disbanded. The disc showcases seven new outstanding Yardbirds compositions.

Annapolis setlist: I'm Not Talking * Over Under Sideways Down * Please Don't Tell Me `Bout The News * Crying Out For Love * The Train Kept A-Rollin' * Heart Of Soul * Little Games * Dream Within A Dream * You're A Better Man Than I * Shapes Of Things * Happenings Ten Years Time Ago * Rack My Mind * Back Where I Started * Mystery Of Being * For Your Love * Still I'm Sad/Dazed And Confused * Encore: I'm A Man * Smokestack Lightning

Blast from the Past
The Yardbirds rave on Annapolis stage 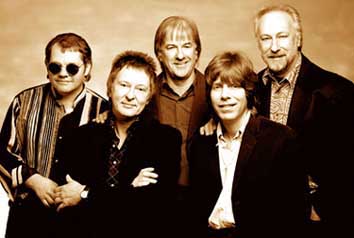