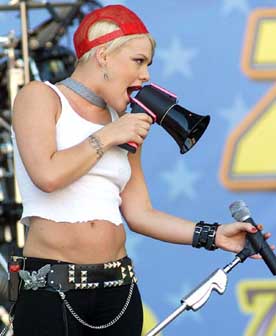 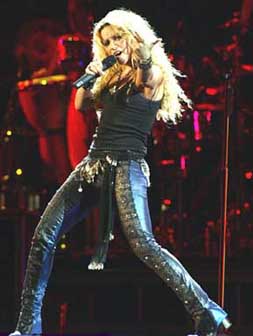 WHTZ Z100 of New York City brought together many of today's top musicians on a giant bill at Giants Stadium in East Rutherford, New Jersey, to celebrate the Z Morning Zoo's birthday party with six years of broadcasting on radio. The diversity of music performed represented major U.S. and Canadian artists.

With a Z100 numeric countdown, Philly-suburb girl P!NK launched Zootopia 2002 with her smash chart single "Get The Party Started". The stadium field had reached capacity by curtain time, but the stands were not quite full yet. Performing the title track off her new disc, "M!ssundaztood", P!NK proved to be a popular choice to jumpstart the concert.

The Goo Goo Dolls put in a four song performance. Guitarist John Rzeznik sang the familiar "Slide". The band performed "Here Is Gone", a new fastpaced rocker on Gutterflower. Michelle Branch, a young, prolific guitarist with the potential for a bright future, followed. She ran out on stage with mic in hand to sing her breakthrough hit "Everywhere" before strapping on her acoustic guitar. Girls across the stadium joined in on singing her new single, "All You Wanted".

Z100 DJs upgraded a lucky concert patron seated in section 330 with two front row tickets. Vanessa Carlton was one of the most impressive artists at Zootopia 2002. The prolific piano composer performed solo behind a piano to sing her bouncy ballad, "A Thousand Miles". Carlton was one artist who deserved more stage time.

New Yorker Marc Anthony appeared on stage with a large backing band to support his performance. He began his set with a new song, "I've Got You". The Latin ballad, "You Sang to Me" showcased his vocal abilities. The salsa swing of "I Need To Know" featured a prominent horn section. British sensation Craig David was another concert highlight. He sang "7 Days", "Walking Away", and "Fill Me In" with simply an acoustic guitar accompaniment.

Canadian Alanis Morissette put in a brief appearance. She began with the rocker "All I Really Want" from Jagged Little Pill, but her microphone was not functioning properly which was a major Zootopia disappointment. "Precious Illusions", a new number, recovered from the soundboard glitches. Her shock rock hit, "You Oughta Know", received a collective cheer when the drums kicked in.

North-of-the-border native Celine Dion was warmly received by Giants Stadium. Her appearance motivated most of the crowd up onto their feet during her performance. The international Diva began her min-set with the popular "That's The Way It Is". Dion concluded her all too brief moment with her titanic ballad, "My Heart Will Go On", which generated a huge response from the women in the audience who sang along.

Baseball players with the New York Yankees were introduced on the ramp. Pitcher David Wells was the given the honor to announce New Jersey native Jon Bon Jovi. His lengthy set rocked Zootopia 2002 with guitar-driven album-oriented-rock hits from his career. The entire stadium was out of their seats, clamoring for their musical hero when Jon began singing "You Give Love A Bad Name", which featured a minor fireworks display.

Bon Jovi lead guitarist Richie Samboro was Jon's ace in the hole, tearing up his guitar neck hit after hit. Bon Jovi ditched his guitar to sing "It's My Life". He began "Living On A Prayer" with a vocal intro, which later had the entire stadium singing for the chorus. "Wanted Dead Or Alive" had Jon on acoustic guitar for this power ballad. "Bad Medicine" featured his stage moves as he charged all over the ramp. After a lengthy dramatic pause, he literally jumped into the classic "Shout", which closed his set with additional fireworks; possibly the climax of Zootopia 2002.

Members of the New Jersey Nets were brought out onto the stage ramp. Point Guard Jason Kidd was handed the mic to introduce P. Diddy's appearance. Unlike other musicians, a video montage of clips from his career was played before he made his stage entrance. Milking his stage intro for dramatic effect with a P-D symbol, the Puffmeister's silhouette fell on a curtain as sparklers, orange flames, and a siren heralded his coming.

Busta Rhymes joined the Puffmeister for a duet on the comical "Pass The Courvoisier". While singing his pop ballad "I Need A Girl", long stem red roses were handed out to select women seated on the field. He sampled portions of material from such diverse artists as Creed, War, Diana Ross, the Black Hearts, Led Zeppelin, the Police, and Queen.

A September 11th dedication of "Missing You", which included WTC footage was followed by a 'moment of noise' with three arm waves around the stadium. A sense of timing and an ability to interact with his audience are the foundation to the Puffmeister's successful stage presentation, overshadowing his musicianship.

Shakira was a late hour surprise, going on at 11:50 PM. She and her band were outstanding, considering many performers had phoned in their vocals throughout the concert. Shakira's musical profile has been on the rise recently and her powerful stage presence was entertaining. With two acoustic guitars to support her, she sang the tender ballad "Underneath Your Clothes". Zootopia 2002 came to a climatic close with her salsa beat-based "Wherever Whenever", which included stage flames, fireworks and confetti.

Zootopia 2002 also featured performances by Outkast, brothers Aaron and Nick Carter, Fat Joe joined by his guest Ashanti, and Mary J. Blige. The incredible evening affair was a musical extravaganza hosted by Z100. Jay-Z made a cameo on stage shortly before Mary J. Blige sang to her accompanying backing tracks.

With the advancement in sophisticated technology, two huge video screens sandwiched the stage, projecting both music videos and commercial videos during the stage preparation time in between sets of participating artists. With a captive audience, concert sponsors can now market and advertise their products without interruption.

A peculiar phenomenon of the cellular age are the people who make calls at a stadium concert to either broadcast the event over their cell to someone off location or to reach a friend in another section of the venue to ask if that person can see them waving back at them. Oddly, planes are permitted to fly directly overhead during concerts, but not sporting events.

Zootopia 2002 had began as a beautiful Sunday in June. By late evening, things had cooled considerably, and the pleasant breeze later became a chill. The concert coordination was choreographed with a massive rotating stage. Despite a 12:05 AM finish, the stage crew kept the program moving along, ending with fireworks and confetti.

Special Thanks to Josefa Paganuzzi